It’s the first day of Summer Camp at Camp Lebanon, and the first day of Super Kids 1!  There are so many SUPER 3rd-6th graders here, and we can’t wait for everything that’s going to happen this week.  It hasn’t even been a full day of Camp yet and there has already been a ton of fun, including fishing, Octoball, four-square, & playground adventures – all before dinner!

Speaking of dinner, after learning about how to lower the flag each night, campers had a delicious meal of turkey & cheese sandwiches, veggies, chips, and a yummy brownie.  It was a picnic dinner, so campers sat together with their cabin and spent some time getting to know their counselor and the rest of their cabin mates!

Campers also get to have a tour around camp with their counselor, learn some of the rules for the week, and get their Bibles ready for the first chapel!  One of the best parts of Super Kids week is getting to sing all of the crazy Camp songs.  Campers got to learn a brand new song today! 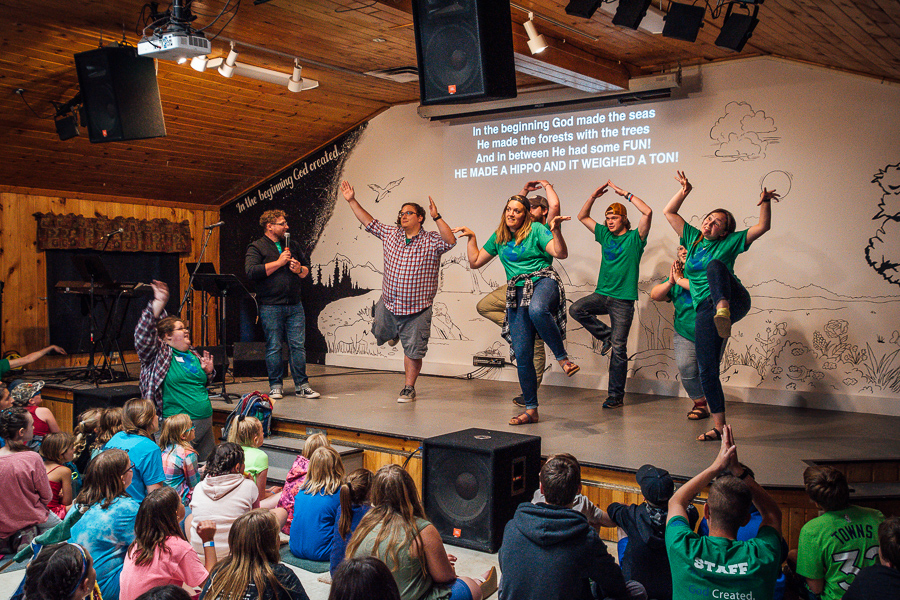 TAKE CAMP HOME:  Ask your child to teach you the Hippopotamus song!

Our speaker this week is Wendy Gordy.  For her first night speaking in chapel, she took some time to introduce herself to the campers by telling them some fun facts about herself.  Then she introduced them to the main topic for the week – the Big “T” Truth: God is our Awesome Creator!  Tonight, she asked the campers to think about what makes them say “WOW!”

TAKE CAMP HOME:  Take turns with your child in listing 5 things in God’s Creation that make you say “Wow!”  Can your child remember the thing that makes the speaker, Wendy, say “Wow?”  (Hint:  She loves music!)

Wendy gave each camper a challenge for the week – to look for “God’s fingerprint” at Camp.  The Big Life Lesson for the week is: To grow “True North,” you gotta DIG DEEP!  Campers read together from Romans 1:19-20:

“For what can be known about God is plain to them, because God has shown it to them.For his invisible attributes, namely, his eternal power and divine nature, have been clearly perceived, ever since the creation of the world, in the things that have been made. So they are without excuse.”

It’s been a full busy day already, and there’s still more to come!  Tonight, the summer staff put on a Variety Show for the campers, performing skits that are definitely going to get some great laughs before lights out tonight.  Tomorrow is the first full day of summer camp – we can hardly wait!

One way to tell the story of 2022 is to look back at the most engaging social media content of the year.

Stay connected with us!

Do you love Camp Lebanon? If so, we’d invite you to follow us on social media and subscribe to our monthly e-newsletter. Really we just want to help you stay in the loop!

Here is a sample monthly e-newsletter.

Camp Lebanon is a year-round Christian Bible Camp and Retreat Center dedicated to providing a “Meeting Place With God” to help the Church do the work of Christ.

Winter Chill – The Summer Staff Can Cool Off